Leah Chiasson is a contact and friend I’ve made through the blogging world, and I was thrilled to find out she self-published a novel. Ms. Chiasson agreed to answer some Q&A for her debut novel, Marked for the Hunt, and gives us a glimpse into her writing process and inspiration.

Hannah: How long have you been writing?
Leah: I know it sounds stereotypical, but I’ve been writing for as long as I can remember. I remember having this spiral bound notebook when I was a kid. I flipped it around and wrote a short story in the back of it about the sun and the moon. The sun picked on the moon until the earth came between them and he forgot about her. Then romance blossomed when the earth moved. Silly, but I was a kid.

All through high school and college, I was drawn to other writers. My best friend in high school was a writer, too. We would start stories and pass them to each other for approval.

Hannah: What was your earliest experience learning that language has power?
Leah: I don’t know about language, but it must have been around middle school when I discovered the power of story. I was reading stuff like Tamora Pierce’s Immortals and Tolkien’s Hobbit. I hated where I was. I hated school and most of the people there. In those books, I was learning that life could be much better. I wasn’t just escaping, I was realizing what I wanted to do with my life. Since then, story has been how I cope with my emotions. I know that when I’m really depressed, grabbing something by Charles De Lint will give me a beacon of hope. When I’m feeling lonely, I grab a smutty romance novel.

Story helps us in so many ways.

Hannah: What made you want to be a writer?
Leah: I fangirl a little too hard over my favorite authors. I stalk them on all sorts of social media these days, pin pictures of merchandise that I tell myself I desperately need. I wanted to create something that someone else loved so much that they’d be willing to be that kind of freak for me. I wanted my own fandom, I guess. Is that narcissistic? Maybe just a little… okay, maybe just a lot.
Plus, I wanted magic in my life. When I couldn’t find the kind of magic I wanted, I turned to writing it in my own worlds. My favorite is the kind that blends in with modern society. It could be around the corner right here, right now. That drives me.

Hannah: What is Marked for the Hunt about?
Leah: Marked for the Hunt began life as a short story I wrote for a workshop class and later gave to a friend as a gift. It is about Diana who happens to be a type of Irish werewolf called a Faoladh (pronounced Fow-luh). After a pretty traumatic childhood, Diana is forced to face her fears when she returns to Wolf’s Head.

It’s about the fine line between what is animal and what is human. On what side does the monster lie? Diana grapples with the notion of monstrosity versus responsibility when lives she holds dear are on the line. Will going up against the monster of her nightmares make her a hero or will she find a monster inside herself? She finds herself constantly riding that fine line through most of the book. 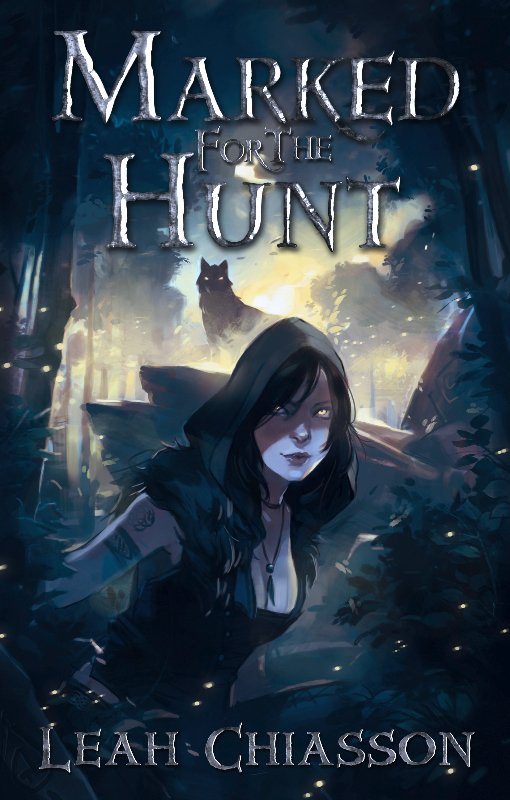 Hannah: What inspired you to go the supernatural route for your novel?
Leah: Growing up, I wanted more magic in the world. The easiest way to get what I wanted was to read. I’m passionate about magical elements in a real setting, but vampires left a sour taste in my mouth. I was sick of seeing them everywhere. There wasn’t anything new left to do with them. I mean, they already sparkle! I wanted to write something earthier, more wild. Werewolves was an easy choice after that. It only took three years to find a fresh spin on it, calling them the Irish Faoladh.

Hannah: What is your writing process?
Leah: It always starts with that shitty first draft. I’ve been using Nanowrimo (National Novel Writing Month) to push myself to finish a novel in a month. I like to have a rough outline before I work, but the first draft always gets away from me. From there, I do paper revisions, jacking my work up with a red pen. Translating those revisions and edits to the file opens path ways to plot holes and other crap writing that needs love. Marked took me four years to rework. I got so sick of looking at it.

Hannah: If you could tell your younger, aspiring writer self anything, what would it be and why?
Leah: Inspire yourself. Get outside, travel, live a full life. Take a bath with some fun bubbles if you need to. It will fuel your inspiration so that you never have to wait on the muse to come knocking on your door.

If that doesn’t work, build some bangin’ playlists on Youtube. Music lights my fire.

Hannah: What is the most difficult part of writing a novel?
Leah: Getting words out feels like trudging through mud lately, but I think the hardest part is actually getting the plot to weave perfectly over the span of 80,000+ words. It is so hard to maintain what is going one over the span of so many scenes. You forget what day it was two chapters ago when you put a time limit on something. You forget that character’s name when they wandered on scene by accident. Sometimes you may think you have this whole, perfect story and then you look at it a year later and find this glaring plot hole you never considered. Large scale story weaving is complicated as hell.

Hannah: How was your publication process? Why did you choose to go the indie route?
Leah: Indie scared me for most of my adult life. I thought it was like skipping a coming of age rite. But, later, I realized that the market I wanted to be in was already over saturated and the chances of a traditional publisher picking me up were one in a million. Maybe literally. I tried for a little while. I sent chapters to agents and got the same answer every time. So, I set it aside. Recently, my husband reminded me that I could publish myself. Last Christmas his present to me was the amazing cover work by an actual artist. It made my book feel so real.

When I quit my day job because it was just too far away, I decided it was now or never.

Hannah: What are some of your favorite books?
Leah: That’s a good question. It changes so often. Right now I’m loving Sarah J Maas and Leigh Bardugo. Maas has me hooked on the characters of both her Throne of Glass series and A Court of Thorns and Roses. I finished Empire of Storms in a day and that thing is thick enough to kill a person with. Because I’m a selfish friend, I bought my best friend the first four in the series for Christmas to make her fangirl with me. Bardugo has such a handle on the craft of writing that I’m drooling. In her Six of Crows duology, she writes for six perspectives without losing the voice of each character. It’s ahhhhhmazing! And her world building, don’t even get me started.

A big thanks to Ms. Chiasson for taking the time to answer my questions! If you’re interested in buying Marked for the Hunt, click here.

Don’t forget to check out her website and social media; the links are below!

1 Comment on An Interview with Leah Chiasson, Author of Marked for the Hunt

© Copyright Between the Lines Editorial 2020. Theme by Bluchic.