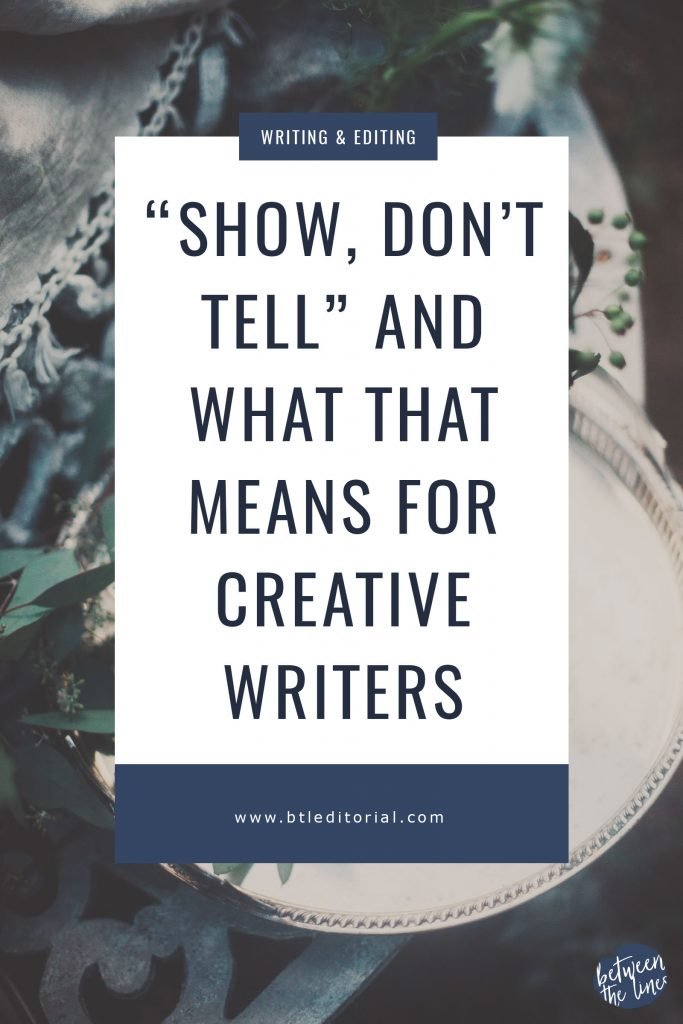 “Show, don’t tell!” It’s arguably the oldest saying in the literary world. If you’re a writer, especially a fiction author, you probably hear this advice all the time. But what exactly does it mean?

Showing vs. telling was something I struggled with my sophomore year of college. It wasn’t because I was a bad writer, and I did plenty of showing. Still, I relied on telling for some scenes where showing would have been stronger.

My professor for that particular workshop was an interesting dude. He was in his mid-40s, had messy chocolate brown hair, and his skin was dark and wrinkled. He always had a mischievous smile and his shirts were typically wrinkled. I swear he came into class just a little bit high some days.

He was a poet and a creative writer teaching a creative nonfiction workshop. Lessons and assignments focused more on the creativity than the nonfiction side of things.

The semester focused on two lessons: The Elements of Style by Strunk & White, and show vs. tell. By the middle of the semester I loathed hearing “show, don’t tell.” But by the end of the semester, I finally figured out what that meant, why it was important, and how to revise my creative writing.

What is Show, Don’t Tell?

One of the reasons I struggled with showing, not telling, during that creative nonfiction workshop was that nobody really explained what it meant. Writing, “show, don’t tell!” in red pen on my second draft wasn’t helpful, and none of my fellow students seemed to get it either. We were young, naive, and eager to learn this mysterious skill. We weren’t given much guidance.

The idea of “show, don’t tell” is easily summed up in a quote from author Anton Chekov:

“Don’t tell me the moon is shining; show me the glint of light on the broken glass.”

Put simply, telling is stating an action or emotion while showing creates an image in the reader’s mind.

It might not seem complicated when you look at “show, don’t tell,” in that way, and it doesn’t have to be complicated. However, if you weren’t taught to write this way, or haven’t had it drilled into you that you should do more showing, it’s going to take some time to retrain your brain!

Let the Reader See It

To provide some more context to the almighty “show, don’t tell” rule, I’ve provided some examples and explanations below.

Ok – so Roger is tired. Does that evoke an emotional response from you? Do you feel tired, too? Do you immediately picture someone who is tired? Probably not!

Here’s the sentence reworked to show the character’s fatigue.

“Roger slumped in his chair, his eyelids heavy with sleep.”

Sure, the second sentence is longer, but that’s not necessarily a bad thing. In the reworked sentence, it’s easy to picture a tired man, half-asleep in his cubicle at work. On a more subtle level, it may also suggest something about the character in relation to the broader narrative of your story.

Let the Reader Feel It

Describing emotional responses from characters are a great way to get showy! Unfortunately, it’s all too easy to fall into telling when it comes to emotions.

Examine the difference between these two examples:

The first line tells us that Amanda is impatient. Choosing a stronger verb (and eliminating the need for an adverb) shows the reader Amanda is impatient, and it’s easy to hear someone “snapping” a command than it is to hear them “saying it impatiently.”

Let the Reader Experience It

Besides letting the reader see and feel the scene, be sure to engage the different senses when writing.

Look at this example:

“The room was dirty.”

Now, look at this expanded description:

“As Brian opened the door, the smell of dirty gym socks nearly knocked him over. Empty water bottles were scattered across the bedroom floor and crumpled up pieces of paper covered the desk. A thick layer of dust covered the empty bookshelves.”

By engaging the senses of sight and smell and providing more description, it’s easy to picture the dirty room and even smell those dirty gym socks as you read. Showing is more effective for setting the scene.

The Importance of Strong Verbs

In modern English creative writing, verbs carry the weight of sentence. Strong verbs propel your writing forward and are descriptive in and of themselves.

In the example above, we looked at how choosing a strong verb and eliminating an adverb affected our sentence. You can’t simply choose any old verb and assume you’re done, though. Synonyms can still provide different connotations in the same sentence.

Let’s look at another example.

“Riker walked down the sidewalk.”

This is our starting point. Riker is walking down the sidewalk. It’s boring, it’s bland, and it’s unremarkable. It does nothing for the character or the reader.

Google “synonym: walk” and you’ll get dozens of suggestions from Google and dictionary websites. I chose a few to illustrate point.

“Riker ambled down the sidewalk.”

“Riker swaggered down the sidewalk.”

“Riker shuffled down the sidewalk.”

“Riker prowled down the sidewalk.”

We have an innocent amble, a sexy swagger, a tired shuffle, and a threatening prowl. They’re all synonyms for the verb “walk,” but they bring your scene to life and give it another meaning. Go to Google or a dictionary site if you’re stuck and can’t think of a good replacement verb.

It’s tempting to slap some adverbs into a sentence when you want to be descriptive; we’re all guilty of doing that. Most of the time, a strong verb eliminates the need for an adverb. Adverbs aren’t necessarily bad–just use them wisely!

Putting It All Together

Good writing draws a picture in the reader’s mind rather than telling the reader what to think. Here are the basics to remember when writing and revising:

By engaging these best practices, your ability to show your readers the details will create interesting, dynamic stories and scenes.

Looking for a DIY approach to improve your writing? Check out my free five day email course on self-editing! Don’t forget to join the Between the Lines Facebook group to connect with other writers.